Photo: Vicenzo, me and Leonardo in retro Pansèr kit. As I’m born and bred in Southampton it’s a classic Saints strip.

Before I explain the confusion, here’s an unrelated photo from last Thursday. I was only a few metres from Yates and Froome but they were travelling too fast to say hello as they passed through Fano in the Giro. 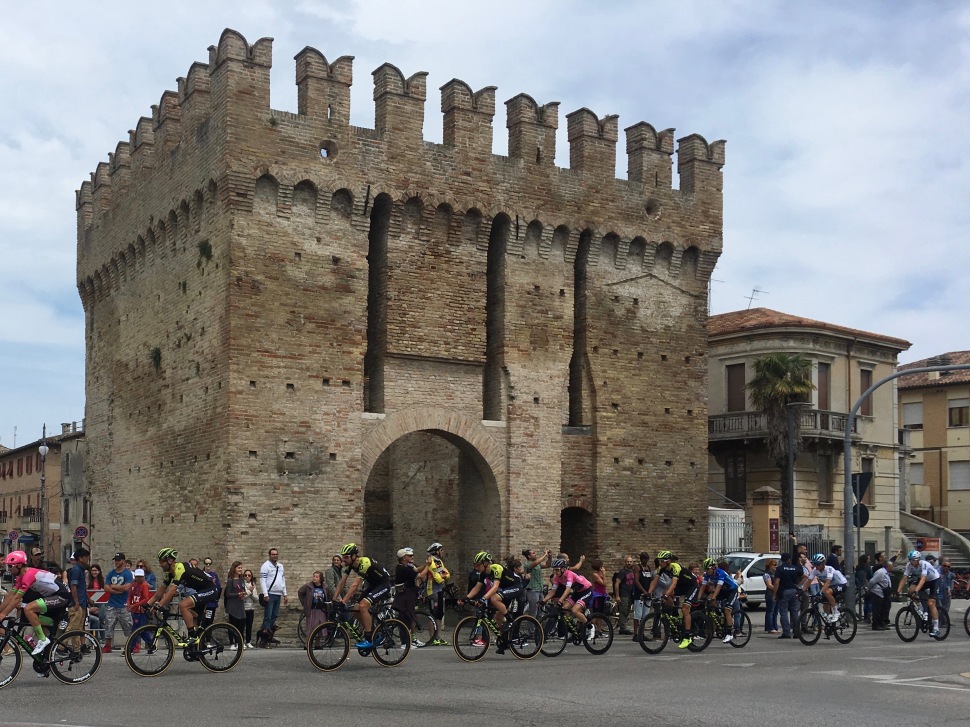 What a confusing weekend. It started badly on Saturday morning when my Garmin decided not to work. Properly not work. I turned it on as usual but it wouldn’t record. It wouldn’t do anything. I used the Strava app on my phone whilst trying to both ride and sort out my Garmin. I gave up and rode naked with no data in front of me.

I wasted all afternoon on Saturday trying to sort out my Garmin. Factory reset made it worse. Garmin support were less than useless. I had to abandon my attempts to get it to work as I had to leave for Cesenatico. Why Cesenatico? Apart from being a beautiful sea side town it was the start/finish of the 48th edition of the oldest Grand Fondo in the world – the Nove Colli (Nine hills).

One of the reasons we chose Le Marche, rather than Tuscany, for example, is that there are fewer Brits. We’ve had a house here for 15 years and until 2 years ago we knew no Brits. Our friend P is a Londoner but he’s acceptable as he lives in Fano and is married to an Italian. He’s young enough to be my son but a really nice guy and great company. Did I mention that P completed Italy’s first Iron Man race last year?

P and I arrived at the hotel. “Sono signore Fisher”. The receptionist replied “I’m sorry, I only speak Italian and English”. She had heard the name Fisher and assumed I was German. I’ve spent my whole life explaining to Brits that my surname is spelt ‘Fisher’ not Fischer’. I ask them how do you spell fish? So why do you spell Fisher with a C? Fuk knows.

Once we had settled on speaking Italian she said we had booked one room with a double bed. So there were were, confused for a gay German couple. After some checking she agreed we had booked a room each. Confusion over.

The alarm went off at 04:30. Ouch. Our start time was 06:15. Amazingly for Italy the gun went off at 06:16, we were on our way amongst the other 12,000 riders. It was both a thrill and a concern to ride out amongst so may riders, many of whom were inexperienced at group riding. We witnessed a few close misses.

As it was a closed road event (sort of) we took the roundabouts just like the pros. Some to the left, some to the right. Then more confusion. I took a roundabout to the left, P, behind me, to the right. As we exited the roundabout those of us on the left realised the organisers had placed a timing strip on the right lane. We all had to cross the grass verge to get across to the other lane. It was so confusing some riders missed it all together and ended up riding back along the course to cross the strip. The words ‘Italian’ and ‘Planning” are never seen in the same sentence. I thought P was behind me, he thought I was behind him so we both rode slowly. We met up eventually when P waited for me at the beginning of the first climb.

This is when the main confusion of the day started. We were riding the Nove Colli (Nine hills). Each climb was signposted with distance, elevation and average incline. I was prepared for 9 big climbs and set my pace accordingly. P, the Iron Man, climbed ahead of me and we lost contact. With no Garmin I wasn’t sure what to expect. At the rest points I checked the map. That was my mistake. There were two routes on offer. 130km and 200km. As P had taken the winter off after the Iron Man we decided on the 130km. My mistake was that every time I checked the map I looked at the 200km route. School boy error. I was prepared for so much more climbing than necessary.

The fourth big climb of the day finished with an 18% ramp over the last km. So many riders walked up the last 500m. I have never walked up a climb and wasn’t about to start now. I cycled up to the summit to be greeted by an old boy sitting in a white plastic chair shouting “Well done, it’s all down hill from here”. I was so confused. In my head I still had 5 more climbs to go. I hadn’t realised that for the 130km route the climbing was over.

As I descended I began to realise my mistake and relished in the speed of the descent. The last 10km were flat and very exciting. Riding with various groups we took roundabouts at full pelt. I felt a little like Yates and Froome for just a moment.

P finished ahead of me, despite being so confused he got lost with another rider. Quite an achievement to leave a course shared by 12,000 riders and signposted all the way around. P’s ride finished with a puncture. So keen was a rider to collect his medal he cut in front of P with 10 metres to go and caught his wheel, ripping the tyre. Stupid.

After a shower and a beer we talked about doing the 200k / 9 hills route next year. We’ll see. 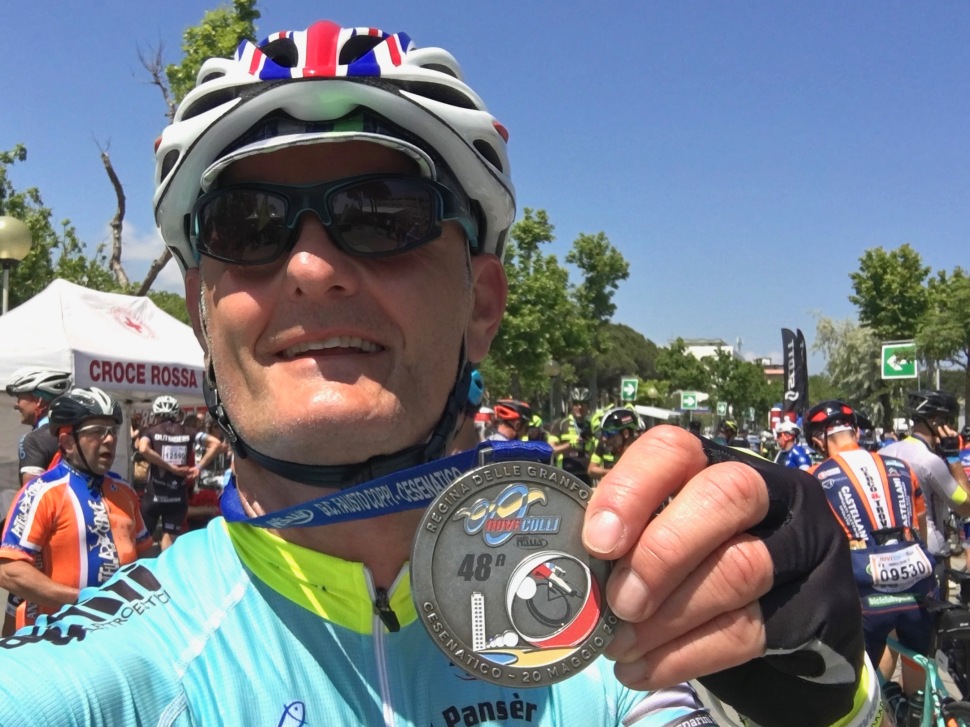 I decided I’d had enough of my failing Garmin. Last night I ordered a Wahoo ELEMNT. It won’t arrive in time for my trip to the Alps to watch the Giro again but hopefully I’ll have data in front of me again soon.