Photo: Hallucination caused by sleep deprivation is a challenge for long distance riders. It seems the camera in my phone was suffering from it. I had no idea I was riding a three wheeled bike.

“I think your shorts are inside out”. So started my first 600k audax. How very embarrassing. Getting ready for the Randogiro dell’Emilia in Spilamberto, an Italian randonneur pointed out my schoolboy error. My defence was that black shorts look the same whichever way around when you put them on in the dark. I suffered the indignity of getting back in the car to put them on the right way.  Hardly an auspicious start, but I was grateful to her for pointing out my mistake.

This audax was part of my plan to qualify for Paris-Brest-Paris (PBP) next year. A 600km pre-qualification ride should be enough to get me on the starting line as long as I complete the 200km, 300km, 400km and 600km qualifying rides in 2019.

I was equipped with my new Alpkit seat bag, sleeping bag, silk liner and bivvy bag. All to test out and gain experience for PBP. I noticed that virtually all the riders had far less kit than I did. I was to discover why later. 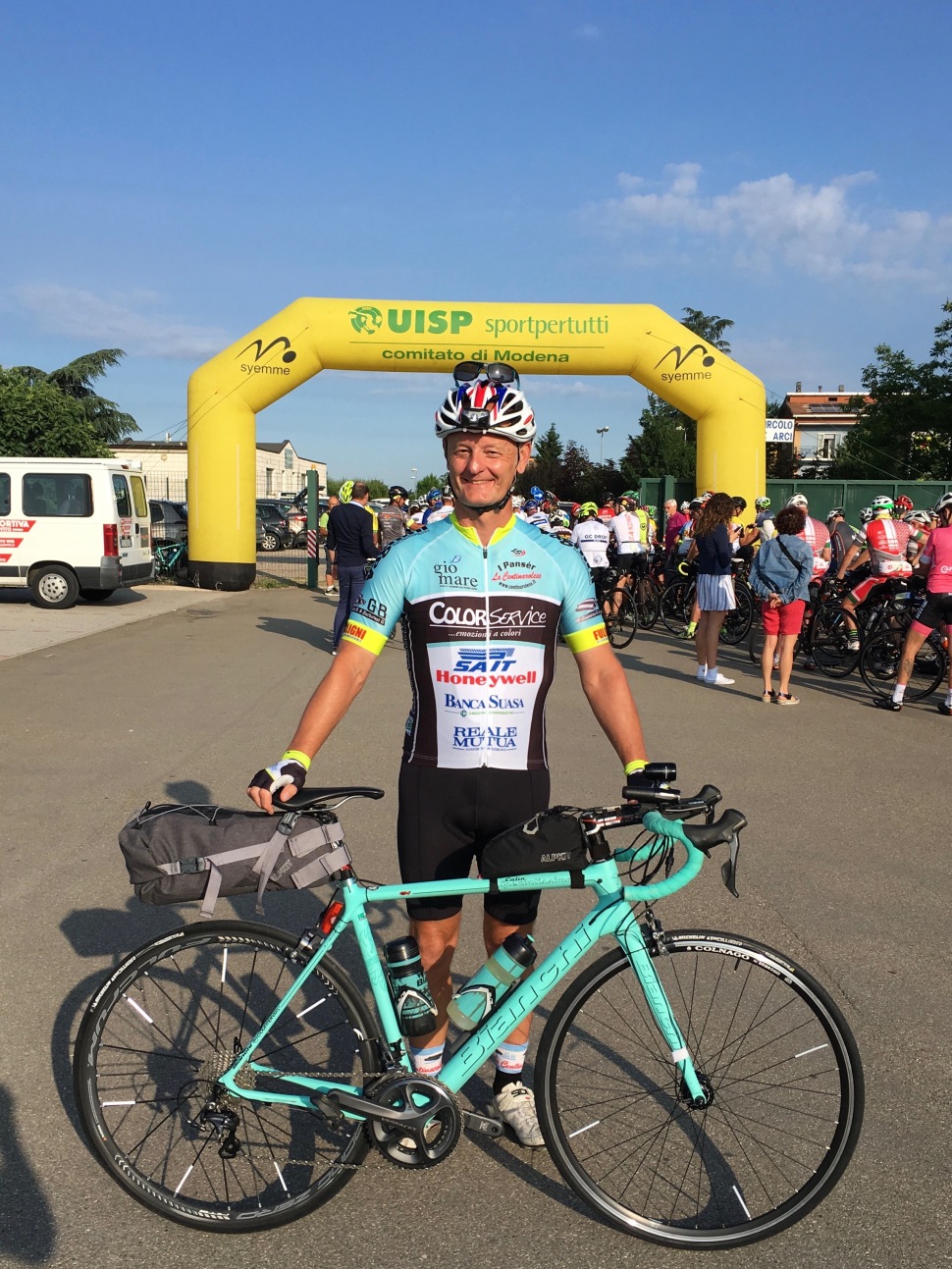 I was also testing my new Wahoo ELEMNT computer after my Garmin completely failed two weeks ago. At first I couldn’t get the route to load but managed it at 10km. I had navigation and shorts the right way round. All was well with the world.

25km in I had to make a decision. A group of us missed a turn and we all headed back. When I saw the gravel path I wasn’t keen to risk a puncture so early in the ride. Having the benefit of a mapping system on my Wahoo I decided to take a slightly longer route whilst every one else took the gravel path. On the previous audax I was the only person in a group of ten to take a right when they all went left. I made the correct choice and they ended up doing an extra 6km back along the same route we had previously taken. This taught me that you have to make your own decisions and not necessarily go with the flow.

Another rider made the same decision as me and we rode together to re-unite with the group. He spoke good English having worked in Chicago for a year. We chatted in both languages, flitting between them. At the half way point I discovered that I’d been riding with Father Christmas. Not exactly, but his name was Natale Gentile. This translates as Christmas Kind. Imagine a Bond film “The name’s Kind, Christmas Kind”. What a glorious name.

The Randogiro dell’Emilia is two separate 300km loops, both starting and finishing in Spilamberto. This explains why virtually every rider had less kit than me. I divided them into two groups. The ‘softer’ and ‘harder’ randonneurs. I learnt that the ‘softer’ randonneurs headed to a hotel or even home after the first 300k loop to have a shower, meal and four hours sleep before starting the second loop. The ‘harder’ randonneurs had little kit as they had no intention of sleeping during the 600k. Whilst the ‘softer’ approach is perfectly within the rules as long as they make the controls in time I do think they did 2 x 300km rides (especially those that got to sleep in their own beds!) and not 1 x 600km.

Having a coffee at Spilamberto after the first 300k loop I got chatting to a group who asked if I would like to join them in their “Grupetto”. As an inexperienced night rider I was glad of the offer. Unfortunately when it came to restart I couldn’t find them anywhere, I thought they’d already left. I was very conscious of some great advice from a PBP finisher about not wasting time at the controls. I decided to head off into the night alone.

Riding alone at night means one hears all sorts of noises from nocturnal animals. I started to hear a strange squeaking noise. I thought little of it until it started getting more frequent. I realised that I was suffering from what I am going to call “Baggers Droop”. A couple of days before the ride an experienced rider on the ICC Forum had advised me to stuff my seat post bag really tightly to avoid the bag drooping onto the rear wheel. When I took out my reflective gilet at the control I didn’t repack properly. Another schoolboy error. I stopped to sort it out. My advice when suffering from Baggers Droop is to stop, unload, re-pack and start again.

The next control was at Carpi where we had to take a photo of ourselves in front of the train station. Being paranoid about evidence of controls I took a photo, a video explaining where I was and when and then had a coffee in the cafe across the road for a receipt as further proof. In the cafe at 00:31 I chatted to the young barista. She was interested in what we were doing. When I explained, she was astounded but very supportive. “Forza, forza, una grande passione”. That’s the joy of cycling in Italy. Most Italians are very supportive of the cycling culture (except of course when they think we’re in their way on the road, but that’s another story).

I stopped for an ice cream a few minutes later only to bump into the group who offered for me to join them. I rode with them through the darkness. That’s when I began to realise that they were ‘harder’ randonneurs as they had little kit. They were going to complete the 600k in one go. I had no idea if I could manage that. I was prepared to stop and sleep but they just pulled me along. I told them not to wait for me in the climbs as I would be slower. I just caught up with them at the next cafe/control/water stop: 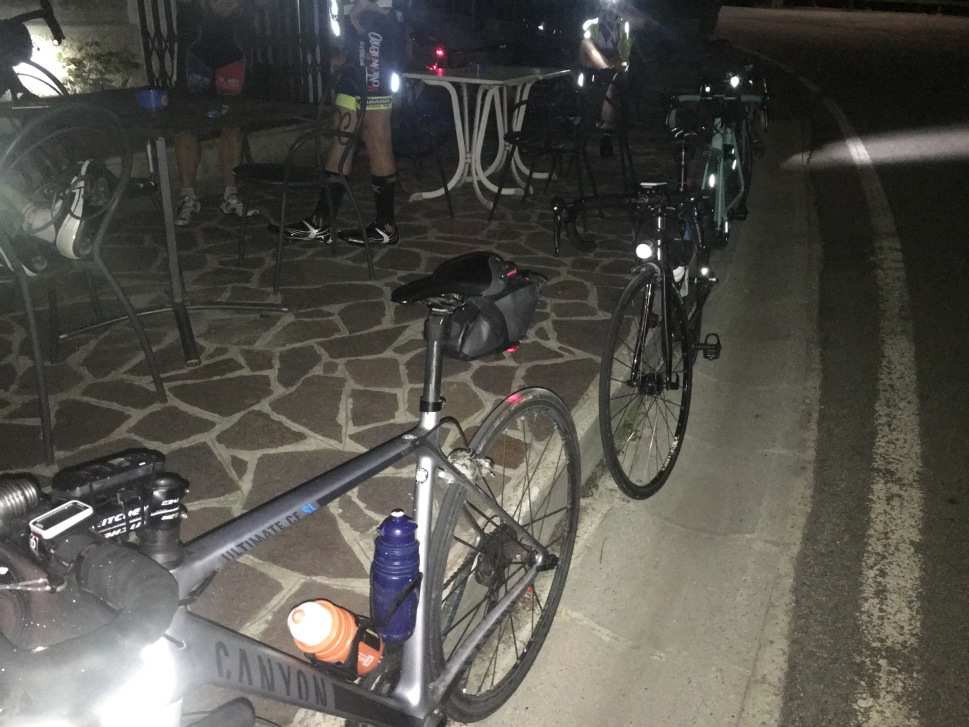 As daybreak began I started to think that I could complete the 600k without sleeping. This seemed completely crazy but surprisingly possible. At the penultimate control I knew I had another 1,000m of climbing, half of which was in a single 6km climb. I took a selfie to check that I wasn’t deluding myself. My diagnosis was that whilst it was going to be hard I could indeed make it without sleep. It also meant that I carried all that bedding for nothing, all part of the learning experience. 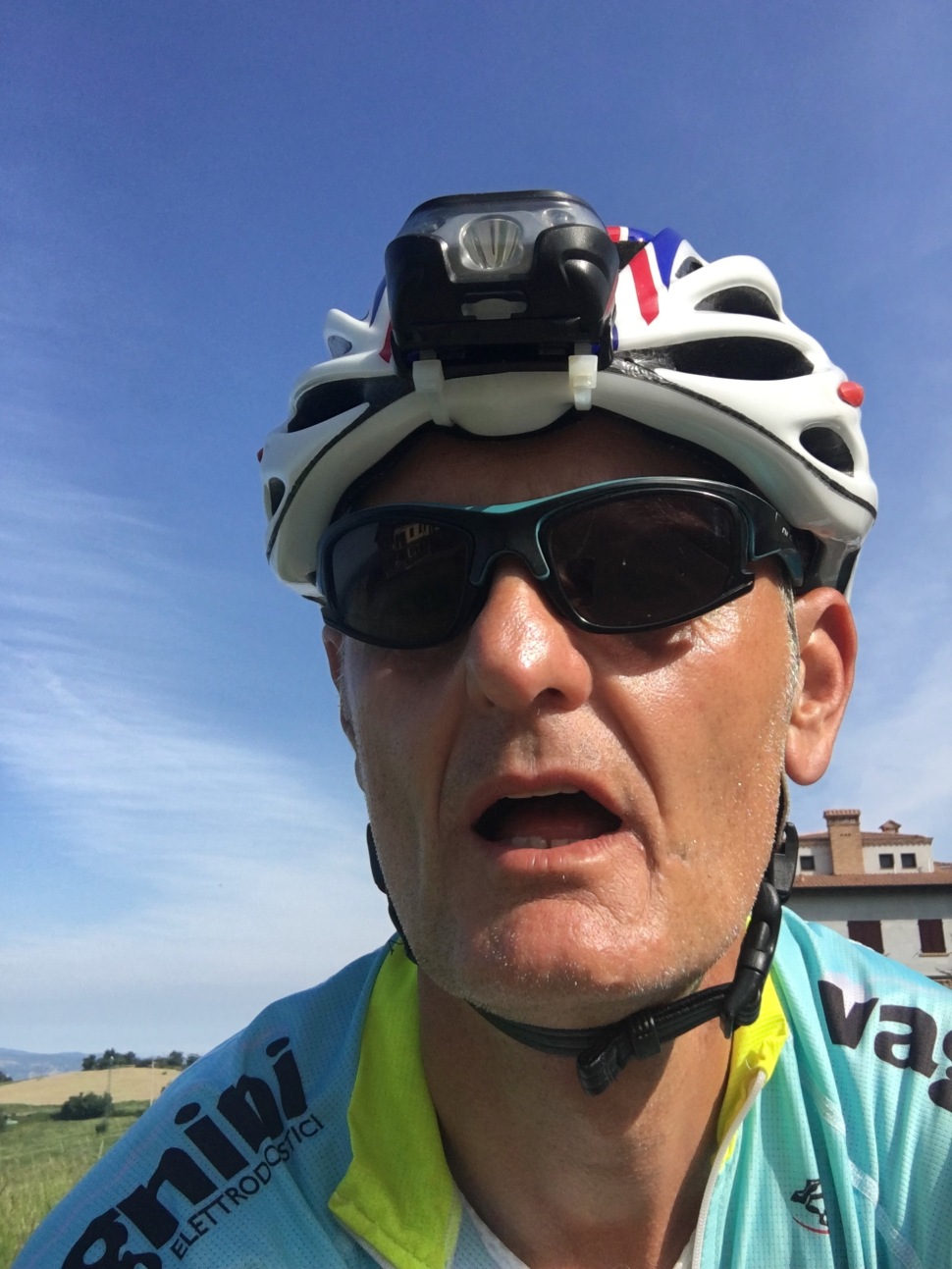 When I lost touch with the group the stunning scenery took their place as motivation to keep going.

The final 50km or so were “mangia, beve, mangia, beve” which literally means “eat, drink, eat, drink”. This is an Italian expression to describe undulating hills. I was so grateful that the finish was a combination of rises and falls but mostly falls.

As the finish line approached, my Wahoo reported 594km. No way was I going to finish on that distance so I ignored the turn for the final control and carried on up the road only to return to record 601km just to be sure I could claim 600km.

My thanks to our friends M & D for putting us up on the Friday night and for looking after Jan over the weekend whilst I did something stupid on a bike. They also fed and watered me on Sunday afternoon.

I still can’t quite believe my finishing time. I asked the organisers to put it on my brevet card. They said don’t worry, it’s not important. I said that I understood that it wasn’t important to them as it’s only about finishing within the permitted 40 hours, but as it was my first 600km ride it was important to me. They laughed and happily obliged. 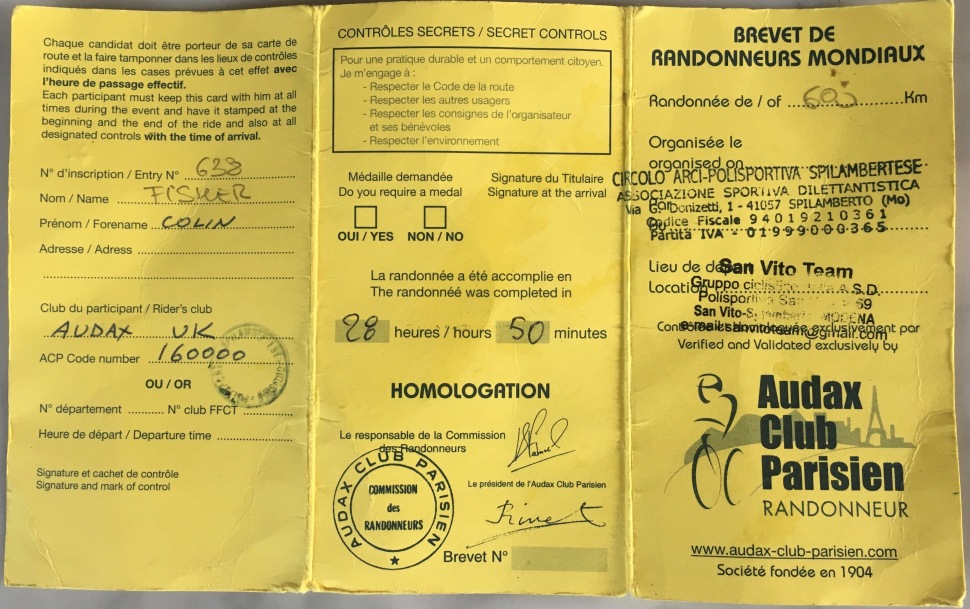 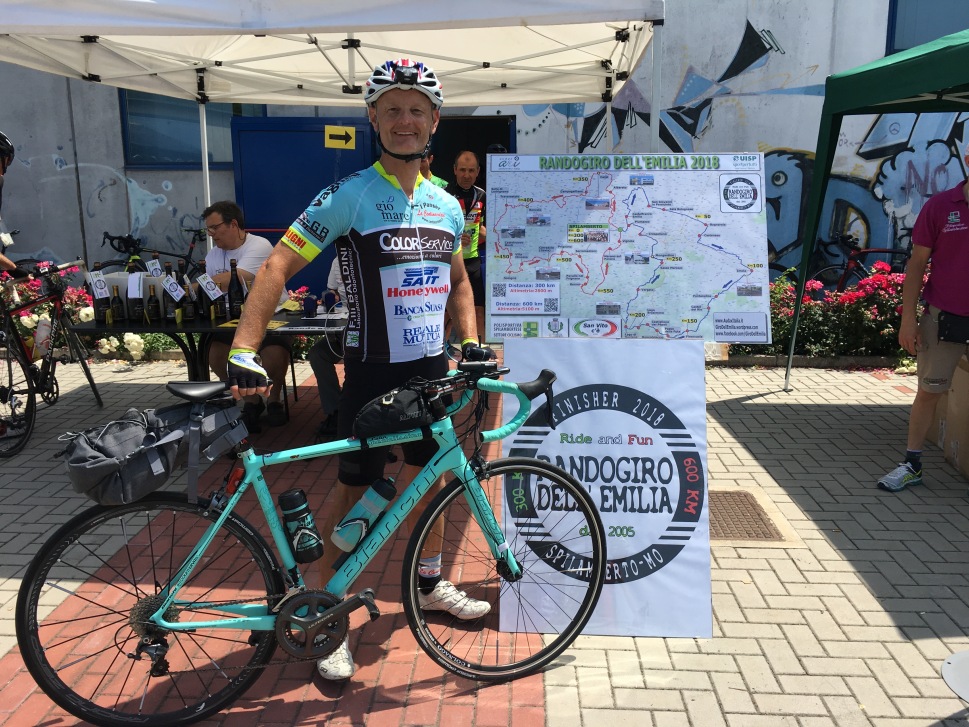 One final thought. I wouldn’t recommend it but cycling 600km without sleep is a great way to burn 14,242 calories and lose 4kg.