Photo: Not a visitor from the cemetery next door but me and my bike kitted out in reflective gear just before midnight.

As part of my preparation for Paris Brest Paris next year I set myself a little challenge:

How far can I ride in one day?

One simple rule: How far can I ride solo between midnight and midnight?

I decided to ride to Venice, 268kms away, and back. So the challenge became:

I was familiar with the first 100km, but relied on Strava and Google Earth for the rest. This was to come back and bite me later in the day. Although titled 500k in a day It’s subtitle is Colin’s Red Light adventure.

My first challenge was getting out the front door. I wasn’t lacking motivation or regretting my decision. The problem was three huge hornets, attracted by the light, trying get into the house through the glass door. They had to be dealt with so that I could start and my wife could take the spooky. Thanks to the hornets I started at 00:05.

In cycling we talk about false flats but what about false reds? Only 15km in I came across a queue of traffic on the Via Flaminia, stopped for a temporary set of lights.  For some Italian drivers, and most Italian cyclists, red lights don’t apply to them, only to others. Not this cyclist. I always stop. After a while the cars in front started to run the red light, except they didn’t. Some bright spark had put a big red light above the road works sign. In the darkness it looked just like a traffic light.

Whilst at the ‘lights’ I spotted two red ones reflecting in my Wahoo. Somehow I’d managed to turn on the red lights of my head torch.

I made good progress through the summer resorts of Cattolica, Riccione, and Rimini. I past a number of women standing on the side of the road touting for business. I was taken aback when three of them spotted me and shouted “forza, forza”. I waved in thanks, my third red light incident of the ride.

By 04:20 and 120km Ravenna was behind me as I cycled through an enormous industrial area. Huge chemical, gas, and refining plants pumping out a weird cocktail of smells including sulphur, petrol and brewing. They were all lit up. Quite a site and quite a sight.

By 06:15 Wahoo was reporting 168km done. This was better progress than I expected so stopped to capture the sunrise at Lido di Volano.

I’d carried enough food to get me through the night but now my thoughts turned to to my first stop and breakfast. The Lidos are villages of holiday homes with, depending on size, bars, restaurants and a few shops. The first two bars I tried weren’t open yet. I suppose the clue is ‘holiday homes’. Why would a bar need to open at 6am for people on holiday. Another lesson learnt.

I carried on until I spotted a lady outside a shop. She confirmed she was opening up. No breakfast, but I desperately needed water. I downed a sports drink at the till whilst chatting to her. She said I spoke good Italian but she thought I wasn’t local. I had to admit I wasn’t. I re-filled my water bottle but had half a litre left over. I went outside to pour it over me for a quick wash. Returning to the shop to dispose of the bottle I discovered she had locked the door behind me and had disappeared round the back. With no bin outside I left the empty bottle just outside the door for her to find. I imagine she thought “weird foreigner, he’s not local”.

Whilst searching for a bar in a small place called Mesola, I saw in the distance what I thought was a man lying in the road with a wheelchair on top of him. I thought my lack of breakfast was causing me to hallucinate. As I got closer I realised it was indeed a man lying in the road. By the time I got there the carer had lifted the wheelchair off him. I stopped to help. The front wheel of the chair had caught in the crumbling road and pitched him out the front door. His carer, maybe his daughter, had no chance of getting him back in the chair. He was a big guy. Seriously big. I reckon about 120-130kg. I asked him if he had any pain in his head or back. He said no but his leg hurt. He pointed to his right leg which was missing below the knee. At that point a number of locals appeared. It was a hell of a struggle but it took four of us to get him back in the chair. At that point he took his cap off and threw it at his carer for dumping him in the street. A bit harsh I thought. She said thank you and off they went. Back on my way I started to feel a mild pain in my left knee. I’ve no idea if lifting that guy caused it or not but I was to feel my knee for the rest of the ride.

Post breakfast, things started to get a bit hairy. I’d planned to get to Venice on the SS309. It looked OK on Google Earth and Strava. It turned out to be a very busy road full of lorries passing really closely. I started to use the map on my Wahoo to get off it as much as possible. Even so I had to return to the SS309 to get across the rivers as it was the only way over.

Approaching Chioggia it started to rain. I took shelter in a bar hoping it would pass. It didn’t, so I had to resume in the rain for the final drive to Venice. A local cyclist gave me a way to avoid the dreaded SS309 for part of the way but I’d have to return to the busy and dangerous road for the final part. I took this photo to show I had at least got as far as the Province of Venezia, if not the city itself. 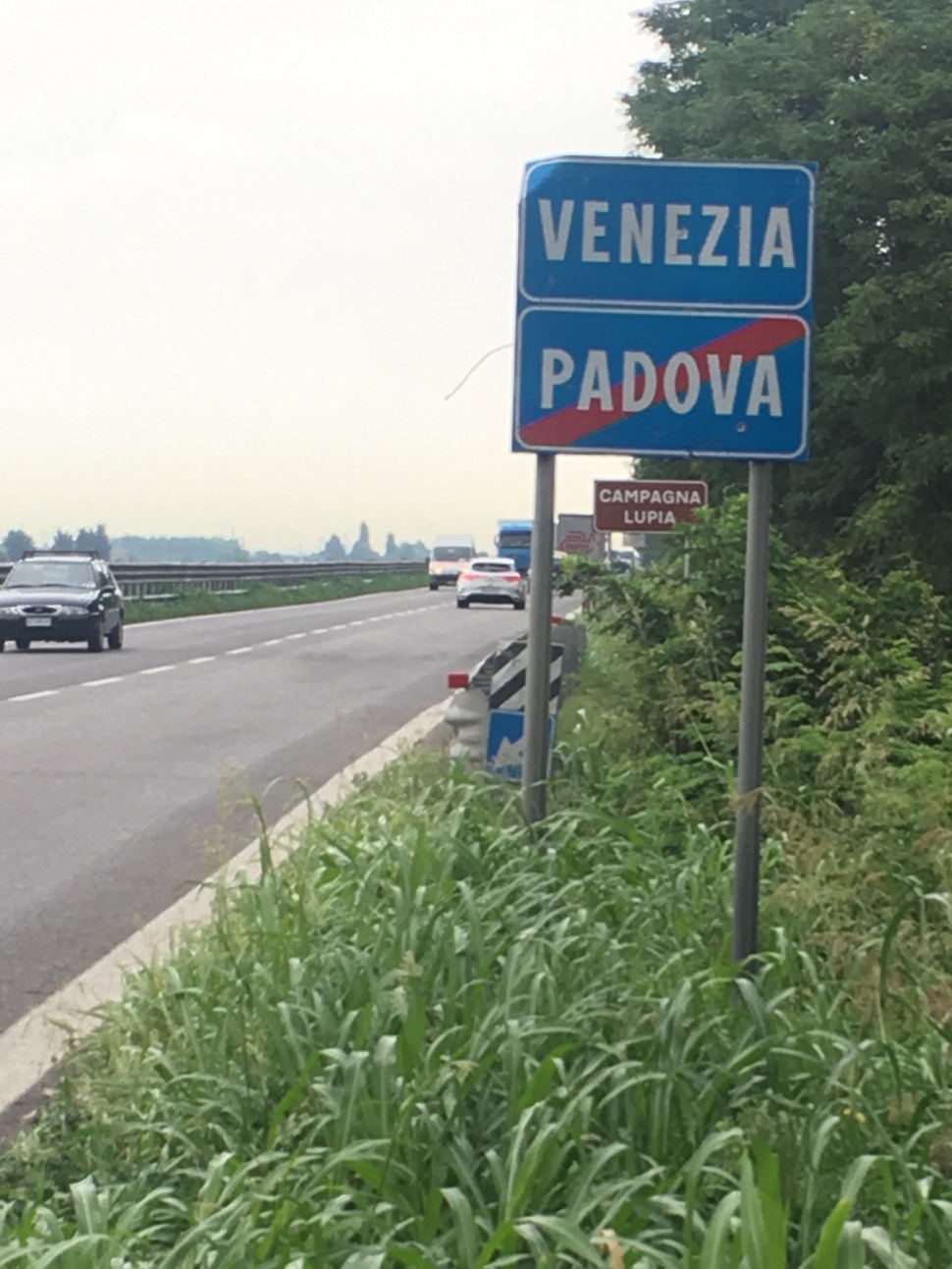 Whilst taking the photo I got a puncture! Rain, puncture, dangerous road, the cycling gods were trying to tell me something. I had a decision to make. If I was to go all the way to the city of Venice then I’d end up doing 280km ish so would struggle to get back home before midnight. I decided that getting off the SS309 was more important than getting to the city. After all it was a distance challenge not a destination challenge. I took the next turn off to discover the wonderfully named Lova, as in “Mr. Lover Lover” by Shaggy.

Photo: On my left cheek you can just make out the scar from the 10 stitches I had when I fell descending the Mortirolo exactly one year ago to the day.

As I headed south the rain stopped. This revealed that the downpour had stripped my drive chain of the lube I had applied after cleaning the bike the day before. I had repeatedly checked the weather forecast. Hot, hot, hot, no rain. I applied ceramic lube when wet lube would have been better. All the way home my left knee pain was accompanied by the grating sound of an unlubricated drive chain.

As the temperature began to rise into the 30s I had to make frequent stops for water. In my region of Marche there are many public water fountains due to the nearby mountains. Not so along the coast of north east Italy. I had to stop at bars every hour or so to drink and re-fill my bottle. This and the SS309 avoiding route slowed me down. Something else that slowed me down was the number of railway crossings. Motorists are supposed to stop when the red light comes on. I saw several motorists driving across just before the barriers dropped. As you know, I stop for red lights. Having escaped the lorries I really didn’t want to to end up under a train.

The afternoon was characterised by on the hoof navigation, stopping for water/ice cream about every hour and lots of mental arithmetic to work out when I might get back and how many km I might manage before midnight.

I was getting tired. I wasn’t concentrating as much as I should. “Bang”, I hit a large pot hole. The pain shot down my spine reminding me of the titanium poles I have after destroying my T9 vertebra. Damage assessment. No puncture but my rear wheel was buckled. Enough to cause vibration under braking but still rideable. It was now late afternoon and about 160km from home. I just had to push on.

As the evening approached I reckoned that if I avoided any incidents I would manage 500k before midnight but could I make it to the pub where I had arranged to meet my wife before the clock struck mid-night?

Leaving Ravenna behind me I made a stupid navigational error. I ended up doing an unnecessary 13km loop. It didn’t really matter from a distance point of view as I would just finish recording before midnight, but I really wanted to get to the pub for a pre-midnight beer. This became my motivation to up the pace. At least as darkness fell I was back in familiar territory, no need for navigational aids.

By 21:00 I was in Rimini again, this time with 450km done. This is where I had my final red light experience of the day.  A car pulled up beside me and the lads in the back seats starting shining a red laser light at me. I decided the best way to deal with it was to keep looking forward and ignore them. They soon got bored of getting no reaction from me and turned off.

I pushed as hard as I could to get to the 500km mark, slowing for the final climb at La Siligata, then a nice downhill run into Pesaro. As I left Pesaro I saw 495km done. I would complete the 500km along the flat sea side road approaching Fano.

I arrived at the pub at 23:41. Normally at the end of a ride I make myself a recovery drink of banana, milk, yoghurt and honey. This ride was a little special, so my recovery regime was 3 pints of Meantime Yakima Red and a bowl of chips.

I’m sure it won’t last, but to my astonishment the ride made me world leader out of 178,309 riders for the Strava August distance challenge. A nice finish to the day.