Photo: North of Málaga. Lots of climbing and near empty roads.

A couple of years ago we were in a cafe in Mâcon, France. A Spanish guy was having difficulty ordering his coffee. The barista refused, as the French often do, to understand “Café con leche”. We stepped in and explained to him, in Italian, that we don’t speak Spanish but we could help him. We ordered his coffee in French “Café au lait”. He was so thrilled he offered to pay for our coffees. Two English people, speaking Italian and French to help a Spaniard order coffee in France.

In my experience, the Spanish and the Italians aren’t like the French. They are very understanding and charming when it comes to foreigners trying to speak their language. Having had to learn Italian it comes in very handy in Spain. I speak Italian, they speak Spanish, we understand each other just fine. I have started inserting Spanish words into my sentences.

My Spitalian is coming along nicely.

A typical exchange happened today when I stopped at a bar in Colmenar up in the mountains.

Me “No, grazie, senza azúcar” 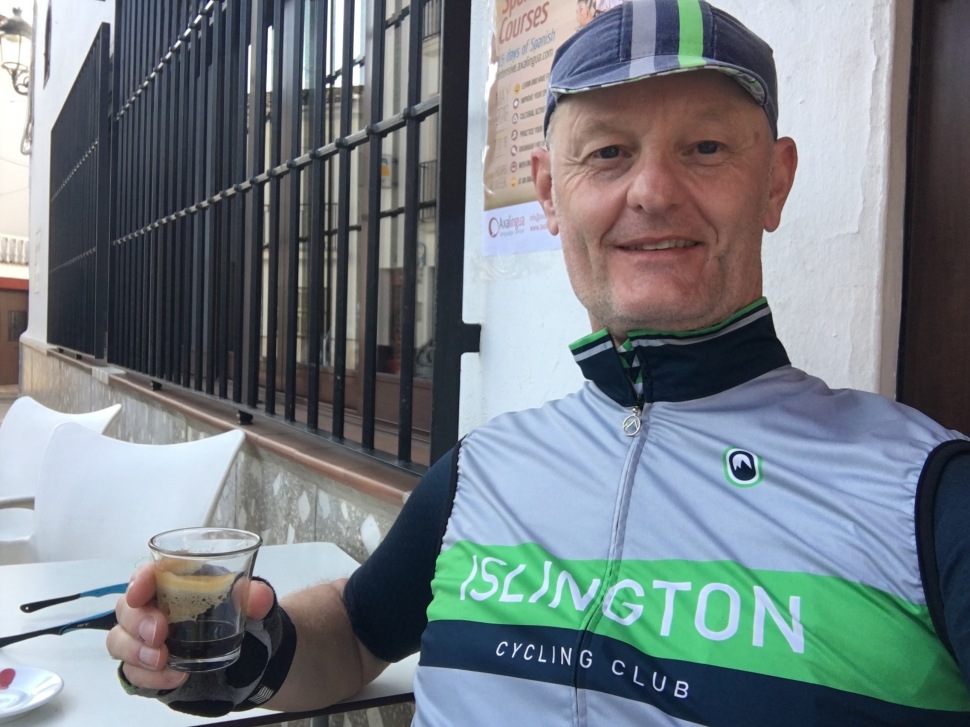 As for today’s ride, imagine a square with the bottom left hand corner being Málaga.

The left hand side of the square is pretty much climbing all the way up to 733m. Empty, well made roads. Mostly 4-8% and no more than 10% it’s a steady 23km to the summit. Across the top of the square is a great descent into Casabermeja, then climb again to Colmenar. The right hand side is downhill all the way back to the coast. To complete the square, a coast road heading West to clock up 118km and 1,620m of climbing.

A shame Hertfordshire and Essex don’t look like this in February:

*”Robert Di Nero’s waiting…(talking Italian)” was the second single released from their title album ‘Bananarama’ in 1984.