Photo: Many bananas lost their lives and their dignity during the London Revolution

“Pride comes before a fall” as they say. For me it was the other way around. Getting ready to fly to London I managed to miss a step on our stone staircase and fell the last four steps, including a 90 degree turn, ending up flat out on our stone floor.

Just a small extra piece of information. As it was my turn to make the tea first thing in the morning I was naked. Now that I have ruined your day with that image in your head I’ll carry on with my story…

My knee, hip and Mac took the brunt of the fall. My knee and hip were sore and my Mac now looks like so many Italian cars, with a dent on the front that I won’t bother getting repaired.

I just hoped the fall wouldn’t compromise my participation in the London Revolution, a 300km circumnavigation of Greater London over two days. The day before the event I managed a 60km test ride to make sure that I and the newly serviced bike was ok. Legs, cranks and chains all moving ok as I toured The Regent’s Park. All good for the weekend ride.

“London Revolution?” said R. It was a rhetorical question as it was 06:30 on Saturday morning, the two of us stopped at the traffic lights with rucksacks on our backs. What else would we be doing? R was a rider I had never met before but two kindred spirits on the road meant we had a great chat on the way to the start. It turns out she lives near Finsbury Park so would be a great addition to Islington Cycling Club. More of that later.

At the start I met up with my two companions for the weekend. D and D. Both with the same first name. For the purposes of this blog I am going to call them Speedy D and Sensible D.

Speedy D declared early with “My plan is to aim for 18mph and achieve 17mph (27-29kph)”. I and Sensible D were planning on a much slower pace. I posted my intentions of getting around in anything between the audax standard of between 15km/h and 30km/h elapsed.

The first leg of the ride headed South from the Lea Valley Athletics Centre, across Tower Bridge and out towards the Surrey Hills. We had been advised to follow the directional signs and not use the route navigation on our computers. This was good advice as every junction was marked approaching it, at the turn and then a confirmatory sign after the turn. At one point a serious traffic accident closed the road. The organisers worked out a detour and changed the routing signs to get us around it. It was mayhem with all the traffic but seriously impressive organisation.

It took over 40km just to get to our first country lane, then our first pit stop at 50km. Sensible D and I met up with Speedy D who had gone ahead with a faster group. After the pit stop the three of us headed out together. The pace was much faster than Sensible D and I had planned but we were happy enough averaging about 30km/h.

It was then things began to go a bit Pete Tong.

Just before the end of that leg we were at a junction when the driver of an AA van stopped to let us out. I was watching the van when I heard a yelp and turned round to see Speedy D‘s bike upright but across the road. He was suffering from cramp, paying the price for pushing too hard. Trying to get off his bike he managed to turn it 90 degrees to block the road. A recovery stop was in order before a much steadier pace just to get us to the final pit stop of the day. Lunch, rest and reflection.

One of the things we reflected on was the gang of hard riders from north the border:

As we set off for the final leg. Speedy D’s Garmin decided it too had gone too fast and froze completely. Then it started to rain. Speedy D felt worse and worse. “I’m fucked” he declared. We decided to put Speedy D in P2 whilst Sensible D and I took it in turns on the front and P3 to help Speedy D home. It was a long two hours in the cold and rain. Sensible D lived up to his name by being the only one of us with a rain jacket. Speedy D and I only had gilets. I was cold and wet but otherwise the legs were fine. Speedy D was really struggling. We stuck together to cross the line as a team: 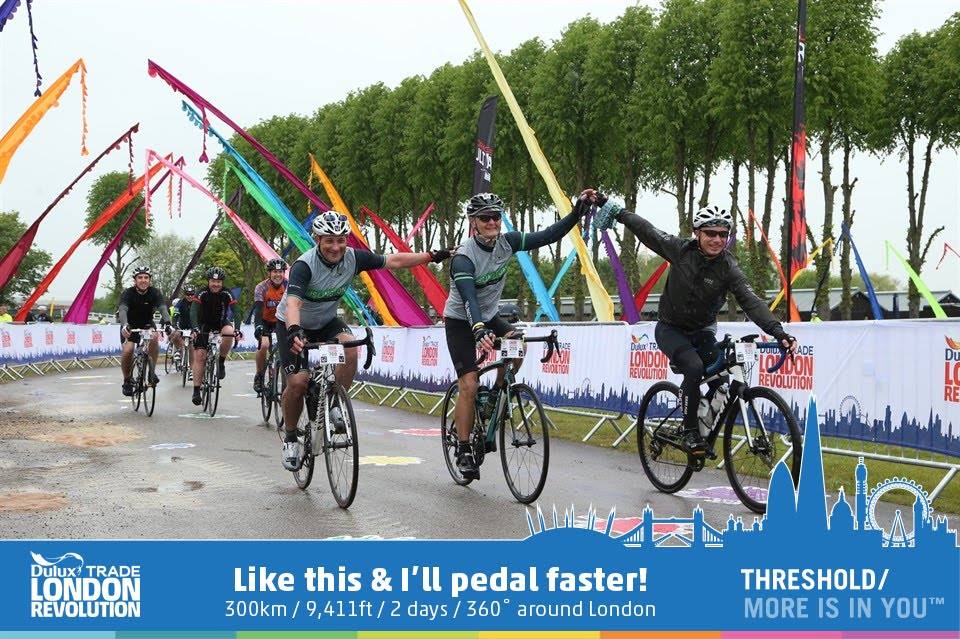 As soon as we stopped our core temperatures started to drop. We headed for a tent that had real flame lanterns. Heat, we needed heat. Later in the queue for the showers I was really cold. Shivering. The hot shower couldn’t come quick enough.

The showers did the trick. We were in much better spirits. However, over dinner we looked at the weather forecast for Sunday. Grim. Rain all morning. Speedy D was contemplating his strategy for the next day. It involved taxis and trains.

Overnight was not the greatest experience of my life. A thousand tents pitched in a soaking wet field. 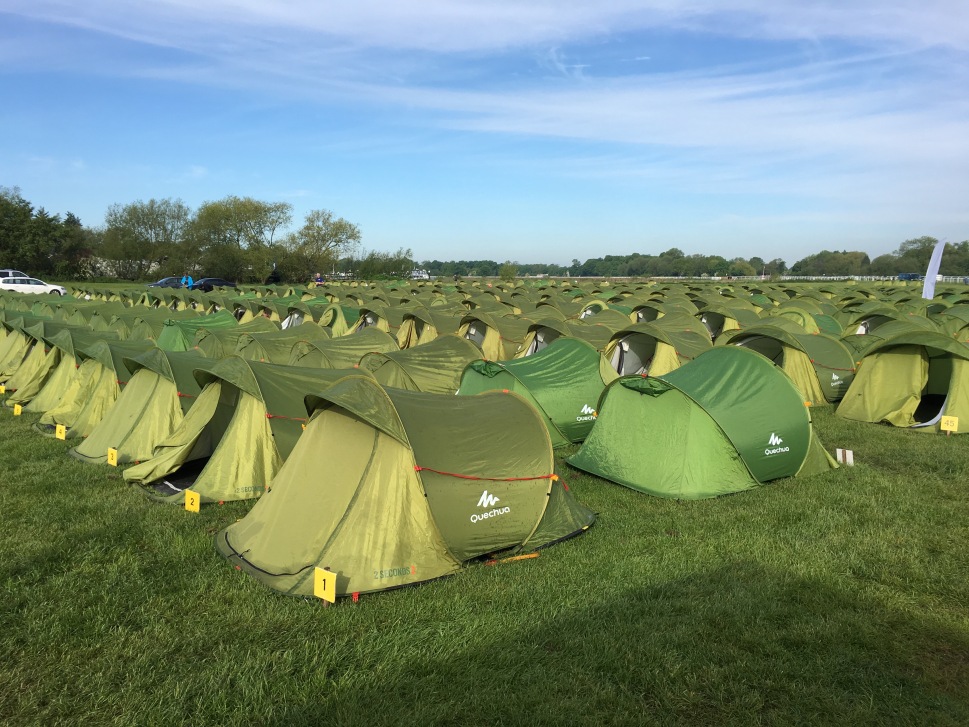 I tested out my new silk liner and bivvy bag with ski socks and night clothes to make up for the lack of a sleeping bag. I didn’t take a bag as I don’t own one. That’s next on my list of stuff for audaxing. That and an inflatable mat. The one supplied by the organisers wasn’t up to much. I managed some sleep but spent about half the night in that no man’s land that is neither asleep nor awake. It was just a little too cold to sleep soundly. The good news is that my devices were all refreshed and powered up for the morning. At least my power pack had had a successful night.

Then the dreaded moment of opening up the tent to head for breakfast in the rain. A revelation. It wasn’t raining and the sun was even trying to make an appearance. The cycling gods were smiling upon us. Even our cycling shoes had mostly dried out overnight, mainly due to the copious amount of paper towels we stuffed into them. It was going to be a good day.

One thing we had in common was that we’re all coffee snobs. The DIY coffee powder on offer wasn’t acceptable, nor was the huge urn of stale coffee. We vowed to stop at the first decent coffee shop we could find. That turned out to be Fego Caffe in Marlow.  We had been warned that the Marlow 5k running race was to share the same route as us for about 500m. The good karma continued. We arrived in Marlow just before the start and sat outside to cheer the runners on. Would you believe it but it turned out that Speedy D’s wife was running the race so we stood on the High Street to cheer her and all the other runners. You should have seen the look on her face as she spotted Speedy D. Looking at her running pace she was much more Sensible D than Speedy D, not too fast but not slow. Perfect.

The rest of the ride was glorious. Some steep climbs and some wonderful views. We were warm, on our bikes and in good form. Speedy D had made a miraculous recovery so we made good progress all day.

The latter parts of the ride used some of the same roads as ICC’s The Italian Job route. As we had all ridden them many times before it felt like a home fixture.

We finished the day warm, happy and with a beer. As we sat down I noticed a familiar face just a few feet away. It was R who I’d met Saturday morning at the traffic lights. We hadn’t seen each other all weekend. We three pointed out the benefits of R joining ICC. We hope we’ll see her in our club colours one day.

It was a great experience. One more cycling challenge ticked off the list. I learnt a few things that will help with my sleeping strategy for audaxes. A sleeping bag for a start. As it’s a sportive and not an audax, if I were to do it again, I’d book a hotel* for the overnight stop. A bed, private bathroom and decent food would be on my list, as well as enough ceiling height to get dressed standing up.

A fall before the pride. Much better than the other way around: 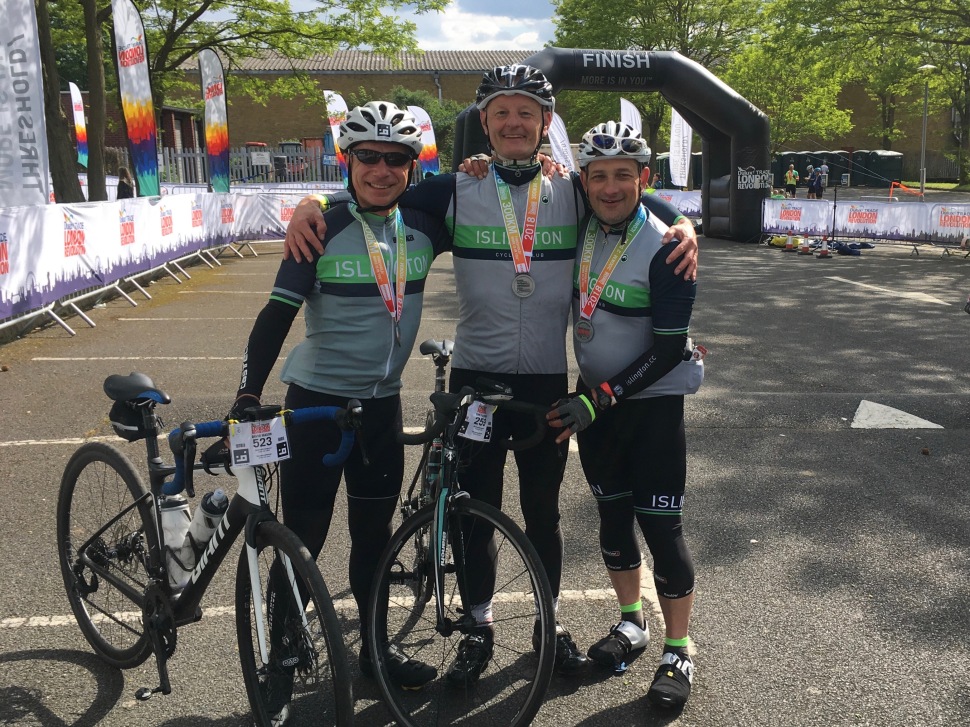 *Speedy D has just posted details of a 5 bedroom house near the campsite that we could rent next year. Much more my style.