Photo: Salvatore the Saviour. At every Audax in Italy I start knowing no one and finish with new friends.

“600km in 40 hours? I couldn’t do that in 40 days”. This was the reaction of our local barista when I told her what I was up to at the weekend. That’s what I might have said four years ago before I started on the road and got hooked on long distance cycling.

My final PBP qualification ride was the Randombardia 600km. Starting and finishing in Paderno d’Adda. It’s a triskelion – three legs of 200km each, returning to base each time. Brilliantly organised by I Ciclisti della Domenica (Sunday Cyclists).

As I turned the corner in Milan at 05:30 on Saturday morning to collect my car my heart stopped as I saw the gates closed and padlocked. I had arranged a special early morning departure. At least I thought I had. I thought my Italian was good enough to make it clear I needed my car bright and early. The ride started at 07:00 but my bike and kit were locked in my car the other side of the gates. What could I do?

As I got closer a man appeared and said “Buon giorno Mr. Fisher, la tua macchina è pronta” (your car is ready) as he unlocked the gates. Great service, I never doubted them!

The three legs of the ride were all very different. Annie Lennox and Dave Stuart provided the link between them. “Here comes the rain again”.

Starting in the rain I was amongst a small group. At the very first junction I heard “sinistra, sinistra” (left, left). My Wahoo indicated ‘right, right’. I trusted my Wahoo and ended up alone. I was right. Later, stopped at traffic lights the group caught me up. Being Italian, they rode straight through the red lights as I, being very British, waited patiently. Shortly after I saw them again, cycling towards me as they were re-tracing their path having made another navigational error.

15km in I had a dilema. Do I stop to help, or do I keep riding? I spotted a rider at the side of the road with his bike in bits. I made my decision. “All ok?” I asked. “No” was the reply. It was a simple puncture but Alberto couldn’t get the brand new tyre off the wheel. It took the two of us and three tyre levers to prise it off. He pumped enough air to get him started but I suggested he find a bike shop en route to pump it up fully.

Sorting the puncture took so long that I was 10 minutes behind the 15km/h limit. I had to push on as Alberto faded behind me. I just hoped the cycling gods looked favourably upon me for stopping to help another rider.

Three hours in I had made up the deficit at 60km. A one hour cushion. By now my shoes, socks and gloves were sopping. They were to stay that way for the whole ride. I’d love to tell you, or show you, how beautiful lake Como was. Think rain and mist. So much so, I took no photos. Grinding through the rain alone didn’t lend itself to stopping for photos.

I would love to go back and ride around the lake in the sunshine. On the western side they have built fantastic cycle paths lakeside so that we didn’t have to ride through the many tunnels.

Then some good news. The rain stopped. The bad news, for me, is that the course diverted for a loop of gravel. I’m not a fan and my bike isn’t really suited to gravel, but at least I wasn’t being rained on.

The first control was at 117km. As I dismounted I heard, in English, “Colin, my angel”. It was Alberto. How did he get here before me? I turned out he did indeed find a bike shop to pump up his tyre but somehow managed to miss the gravel loop to over take me.

The two of us rode out from the control together, chatting in Italian and English. The rain resumed, but more drizzle than downpour. We worked well together down the eastern side of the lake before the climb of the day. As we started the climb we were joined by another rider that Alberto knew. They were both better climbers than me but they waited at the summit.

After the descent we were 18km short of the next control back at Paderno d’Adda when Alberto punctured again. Three levers later we got the tyre off. This time I used one of my CO2 canisters to speed up the process. It gave me a chance to introduce myself to Salvatore. Little did we know just how much time we would spend together over the next 24 hours.

We finished the first loop at 16.58, making it 10 hours for the first 203km.  I took my first photo of the ride. The pasta con pomodoro was very welcome as the rain battered the roof of the control. I dashed to the car to change my wet gloves but forgot one thing in particular. 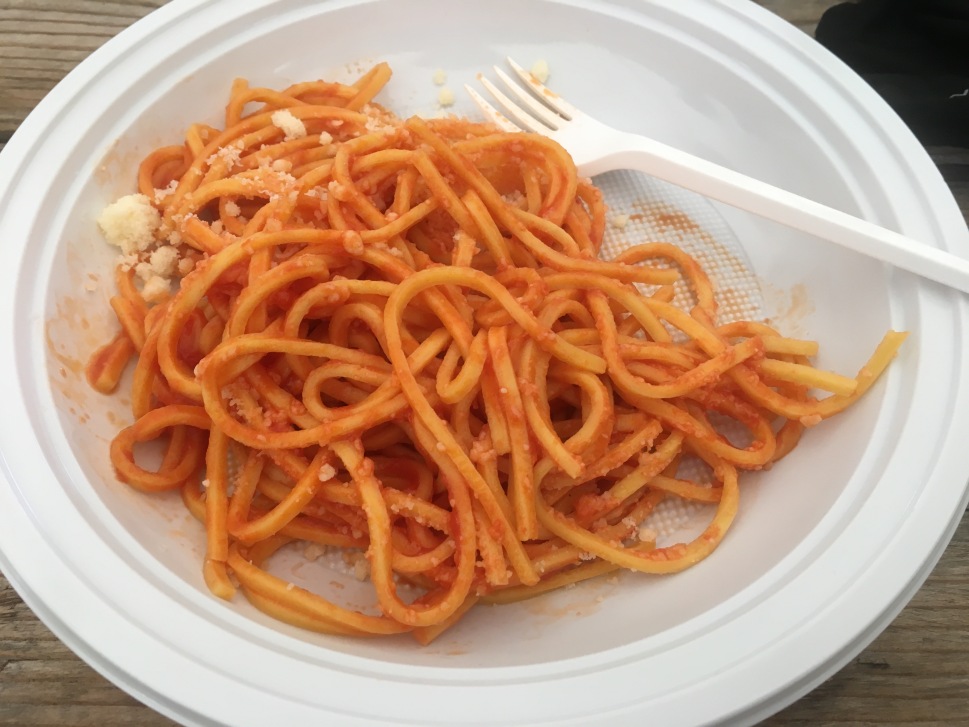 This loop promised to be much faster than the first as it was flat. No climbs. A good choice as it was mostly in the dark. I’ve called this loop the Agricultural Tour as it had two themes. Gravel and the smell of the country.

Six of us set off in the rain for another 200km loop. After only 1km there was some confusion at a roundabout and we ended up in two groups of three. Me, Salvatore and Paolo. The three of us made good progress until the roads turned agricultural. Imagine a gravel road made up of 80% ponds and 20% gravel around the edges. Easily the worst road I’ve ever had to ride. Imagine how much that slows you down, trying to pick a path around the water, in the rain. Joy.

Along this loop there are a number of large pig farms. I think the rain had ‘lifted’ the smell of the countryside. Most were away from villages, but one was so close that the entire village stank of pig shit. Dark, rain and a stench. More joy.

We huddled under the gazebo at the half way control before heading off again into the rain. On this section the cycling gods returned. I had a puncture and used the only remaining CO2 cannister I had. I had forgotten to replace the one I used for Alberto.

10km later I punctured again. I checked the tyre again but couldn’t find the culprit. Back to old school pumping to get the tyre inflated.

Another 10km later and I had the embarrasment of puncturing for the third time. I told Salvatore and Paolo that they could leave me as it was my problem. I had no tubes or CO2 left. Paolo got out his collection of tubes, all with previous repairs. I was so grateful for the help. This time, two head torches focused on every cm of the inside of the tyre. Sharp eyed Salvatore spotted a tiny fleck of dark brown flint. I had missed it during my previous inspections. Lesson learnt. Spend more time checking. The help was my reward for stopping for Alberto. The cycling gods had paid me back.

More gravel, and the pond filled road again meant we returned to Paderno at 04:50. 11 hours for the second loop.

More pasta, more rain. The good news is that the organisers had laid on camp beds in the gym. The bad news was that they were all taken. The three of us decided to get one hour of sleep in our cars in the hope that the rain might ease. Sitting in the driving seat, I pulled up my sleeping bag around me and dropped off almost before I could pull it tight around my neck. I don’t know why I bothered but I changed back into my original gloves that had dried out. They didn’t stay dry for long.

The three of us headed off for the final 200km loop at 06:45. I’ve called it the Alpine Tour as it had that mountain feel with signs to St. Moritz in Switzerland, walking tours with Alpini and wooden chalet style houses.

It was lumpy even before the big climb. Passo Presolana di Rovetta was 470km into the ride and a category 2 climb. The bike points upwards for 22 km, rising 812 metres. I’m not a great climber but usually just keep going until the top. I was so tired that I couldn’t even refuel on the go, so I stopped about two thirds of the way up just to take on a gel and flapjack. That did the trick. I watched Paolo and Salvatore approaching the summit ahead of me.

I pulled into the control just behind Salvatore. We headed into the warm of the café. “Dov’è Paolo?” (Where is Paolo?) we asked. He was nowhere to be seen. The controller confirmed he hadn’t checked in. We concluded he must have gone over the top and descended too far beyond the control to return. Salvatore and I were amazed. This was our first PBP campaign. Paolo is PBP royalty, having completed it five times. Somehow he missed the control.

Descending 25km from 1,220 metres, do you go fast to get it over with or slower to keep a little warmer? The road was wet but at least it wasn’t raining. We went for speed, moderated for the conditions. It was quite a thrill bombing through the tunnels at 50-60 km/h.

One last adventure when the course headed off around the side of a tunnel. I thought we were going on a cycle path just like the ones around lake Como. Nothing of the sort. The tarmac soon gave way to mud, gravel and rock falls. I unclipped as a precaution. 500m down we came to a sudden stop. The whole path had collapsed into the valley. No way could we get across the 50m gap so back up to the road it was.

Back on the flat around Lago d’Iseo they have converted the old railway line into a cycle and walking path. No pedestrians were out in that weather so we had the path to ourselves. Stunning. Except I was starting to nod off. Salvatore agreed to stop for coffee. The restorative effects of a double espresso can never be underestimated.

For the last 50km or so Salvatore the Saviour dragged me to the finish. I was so grateful for the company and the help. Amazingly I found my climbing legs for the last climb of the day up through the aptly named Città Alta. I’d like to meet the route designer who thought it would be hilarious to finish the descent from Città Alta, only to make us go back up it again in part to head for the finish.

At 19.18 we crossed the finishing line to applause from all the volunteers. A really nice touch. I have to confess to a little private moment. Five years ago I broke my back, now I had just qualified for PBP. Once validated I can claim the Audax UK award of Super Randonneur for completing a 200km, 300km, 400km and 600km ride in the same season.

A big thank you to I Ciclisti della Domenica for organising the event and Alberto, Paolo and Salvatore for the company and help getting me round.

Being a member of two clubs, I try to represent them both with my kit.

The state of my bike was testament to the conditions.